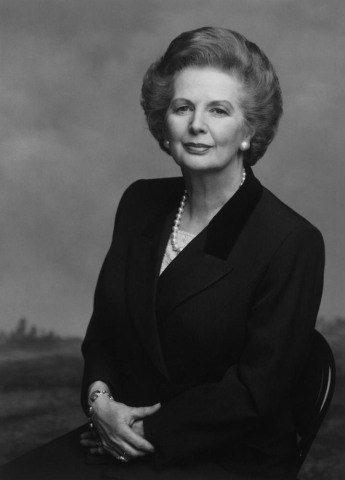 Being powerful is like being a lady. If you have to tell people you are, you aren’t.

The problem with socialism is that you eventually run out of other people’s money.

Look at a day when you are supremely satisfied at the end. It’s not a day when you lounge around doing nothing; it’s a day you’ve had everything to do and you’ve done it.

I am extraordinarily patient, provided I get my own way in the end.

You may have to fight a battle more than once to win it.

Do you know that one of the great problems of our age is that we are governed by people who care more about feelings than they do about thoughts and ideas.

If you just set out to be liked, you will be prepared to compromise on anything at anytime, and would achieve nothing.

I always cheer up immensely if an attack is particularly wounding because I think, well, if they attack one personally, it means they have not a single political argument left.

When I’m out of politics I’m going to run a business, it’ll be called rent-a-spine.

I think we’ve been through a period where too many people have been given to understand that if they have a problem, it’s the government’s job to cope with it. ‘I have a problem, I’ll get a grant.’ ‘I’m homeless, the government must house me.’ They’re casting their problem on society. And, you know, there is no such thing as society. There are individual men and women, and there are families. And no government can do anything except through people, and people must look to themselves first. It’s our duty to look after ourselves and then, also to look after our neighbour. People have got the entitlements too much in mind, without the obligations. There’s no such thing as entitlement, unless someone has first met an obligation.

I do not know anyone who has gotten to the top without hard work. That is the recipe. It will not always get you to the top, but it will get you pretty near.

To wear your heart on your sleeve isn’t a very good plan; you should wear it inside, where it functions best.

Consensus: The process of abandoning all beliefs, principles, values, and policies in search of something in which no one believes, but to which no one objects; the process of avoiding the very issues that have to be solved, merely because you cannot get agreement on the way ahead. What great cause would have been fought and won under the banner: ‘I stand for consensus?

If you set out to be liked, you will accomplish nothing.

I usually make up my mind about a man in ten seconds, and I very rarely change it.

Being democratic is not enough, a majority cannot turn what is wrong into right. In order to be considered truly free, countries must also have a deep love of liberty and an abiding respect for the rule of law.

In the end, more than freedom, they wanted security. They wanted a comfortable life, and they lost it all – security, comfort, and freedom. When the Athenians finally wanted not to give to society but for society to give to them, when the freedom they wished for most was freedom from responsibility, then Athens ceased to be free and was never free again.

Plan your work for today and every day, then work your plan.

No-one would remember the Good Samaritan if he’d only had good intentions; he had money as well.

Socialists are happy until they run out of other people’s money.

Christmas is a day of meaning and traditions, a special day spent in the warm circle of family and friends.

There are significant differences between the American and European version of capitalism. The American traditiionally emphasizes the need for limited government, light regulations, low taxes and maximum labour-market flexibility. Its success has been shown above all in the ability to create new jobs, in which it is consistently more successful than Europe.

To those waiting with bated breath for that favorite media catchphrase, the U-turn, I have only this to say, ‘You turn if you want; the lady’s not for turning.

I am extraordinarily patient provided I get my own way in the end.